Sort by: Recommended
Filter »
Items: 1–35 of 35
Show: 50
Drop items here to shop
Product has been added to your cart
Checkout

For 20+ years, MintProducts has supplied the highest quality gold bullion and collectible gold coins at some of the lowest, upfront prices online. We offer a diverse gold inventory, packed with U.S. Mint gold bullion issues, popular gold bullion releases from around the world, gold bars of various sizes from the most well known refineries and world mints, and the most popular and widely collected numismatic gold coins from the United States and across the globe.

We know that having lots of options can sometimes be overwhelming. Rest assured that the team at MintProducts is here to help. Over the last two decades, our experience in the precious metals industry has helped us identify the most sought out gold coins and bars on the planet. These products have stood the test of time, and will help diversify even the most impressive investment portfolios with tangible precious metal assets. We believe knowledge is power, so we hope the breakdown below helps!

GOLD FROM THE UNITED STATES MINT

AMERICAN GOLD EAGLE: American Gold Eagles have been minted since 1986 and come in four sizes: tenth ounce; quarter ounce; half ounce; and one ounce. Each Gold Eagle is made of 22 karat gold. The composition consists of 91.67% gold, 3% silver, and 5.33% copper. This blend of gold and other alloys allows for a durable coin that will keep its beauty for years to come. In addition to uncirculated bullion issues, the United States Mint also produces American Gold Eagles in proof and burnished versions.

The obverse of the Gold Eagle depicts a modified version of Augustus Saint-Gaudens's famous design for the Gold Double Eagle Coin, which was commissioned by President Theodore Roosevelt. Sculptor Miley Busiek designed the reverse, which exhibits an eagle holding an olive branch, as it returns to its nest where its family awaits.

Every American Gold Eagle we sell comes to you in Gem Brilliant Uncirculated / Proof condition, just as they left the mint. We utilize real time pricing to ensure the price you pay is always as up to date as possible. Don't forget, you'll never pay any shipping or handling charges when ordering any size Gold Eagle from MintProducts.com. Click the American Gold Eagle image, or the product links below to lock in your price now! 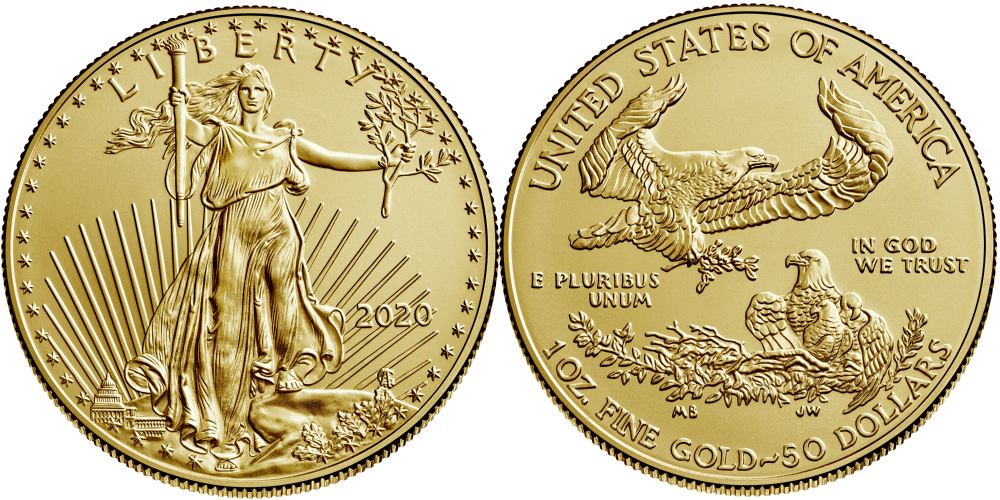 AMERICAN 24K GOLD BUFFALO: American Buffalo Gold Bullion Coins are the first .9999 fine 24 karat gold coins ever struck by the United States Mint. Production of these highly collectible gems was authorized by Congress and passed into law on December 22, 2005.

The American Buffalo Gold coin's obverse and reverse design features were originally prepared by James Earle Fraser, a one time student of famous sculptor Augustus Saint-Gaudens. The design was first used on the Buffalo nickel in 1913 and showcases the beauty of the early American West. The Native American depiction on the coins obverse is said to be based on three different American Indians. Chief Iron Tail of the Sioux and Chief Two Moons of the Cheyenne are two Chiefs who modeled for Fraser. Many others have claimed to have had a sitting with Fraser but documentation was never found to positively identify any other individuals. It's believed that the bison pictured on the coins reverse was modeled after Black Diamond, a famous attraction at the Zoological Gardens in New York.

American Gold Buffalo coins are produced in bullion or proof versions. These $50.00 gold coins are an extremely popular way to invest in 24-karat gold, with content and purity guaranteed by the United States government! Again, we utilize real time pricing to ensure the price you pay is always up to date. And don't forget, you will never pay any shipping or handling charges when ordering any American Gold Buffalo from MintProducts - Your Internet Coin Store! For more details or to place an order, click the Gold Buffalo image or product links below. 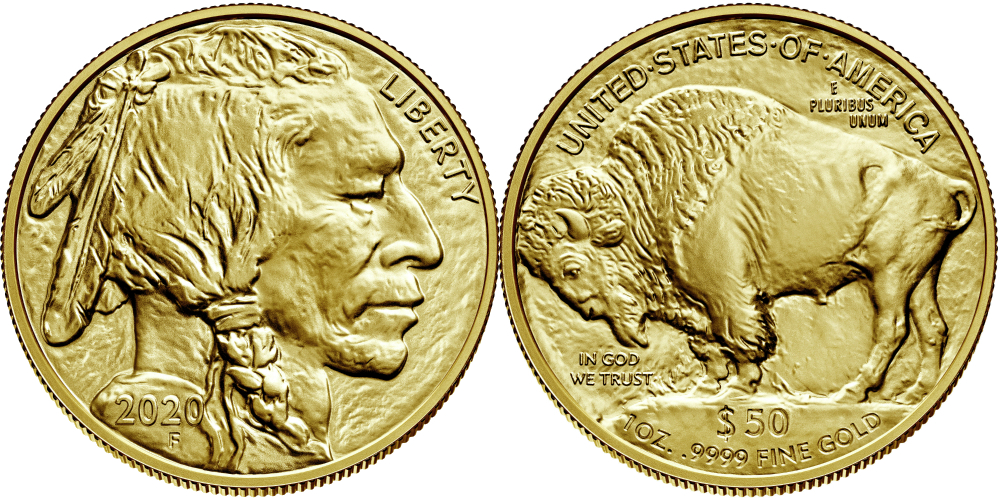 We offer many of the most popular "Pre-33" U.S. gold coins. These gold type coins are not considered bullion and often command a premium over their gold content. We offer these collectible numismatic treasures in various grades, both uncertified and certified by the two most trusted 3rd party grading companies, Numismatic Guaranty Corporation (NGC) and Professional Coin Grading Service (PCGS). All United States Mint issued gold coins are backed by the United States government for metal content and weight. They are both well designed and minted. Click the product image or links to below to place an order, or to learn more about these fascinating pieces of history now! 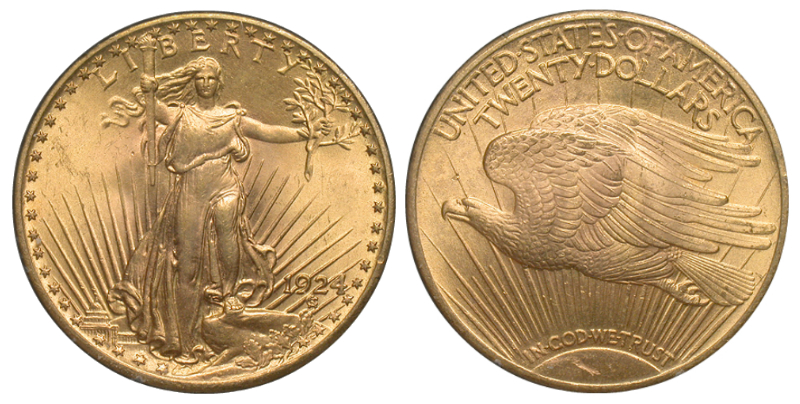 All United States Mint issued gold coins are backed by the United States government for metal content and weight. They feature iconic designs and widespread popularity, making them pleasing to the eye and easy to liquidate.

GOLD COINS FROM AROUND THE WORLD

CANADIAN 1 OZ GOLD MAPLE LEAFS: Canadian Gold Coins are some of the best selling gold bullion coins in the world. Minted by the Royal Canadian Mint, these beautiful gold coins are guaranteed by the Canadian Government for their gold content, purity, and face value. The popularity of the South African Gold Krugerrand led the Royal Canadian Mint to release their own competitive bullion coin, the 1 oz Gold Maple Leaf.

With their iconic Maple Leaf design, these coins are collectible, make a great investment, and are beautiful to look at. This popular issue was the first gold bullion coin to be struck in .9999 gold purity. Click the product image or links below to lock in your price now. 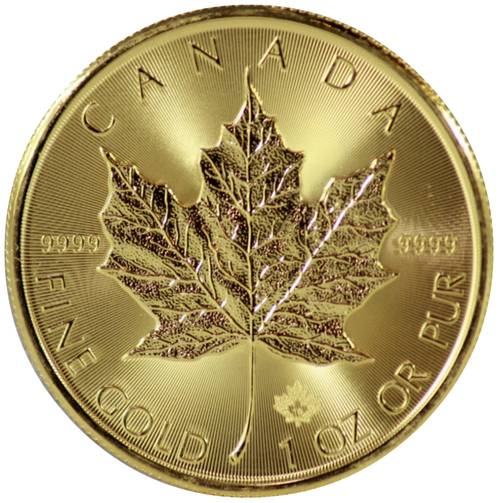 First struck in 1967, the South African Gold Krugerrand was the world's first gold bullion coin. Rather than have a face value, Krugerrands are struck only showing their weight in pure gold. Since their introduction, over 54 million gold Krugerrands have been distributed worldwide. The Krugerrands popularity ultimately led to the coining of the popular Canadian Maple Leaf in 1979 and the US Gold Eagle in 1986, as well as several others.

The obverse of the Krugerrand features a profile of Paul Kruger, a past president of the Republic of South Africa. The reverse shows a male springbok, a national symbol of South Africa.

The Krugerrand has a diameter of 32.6 mm and has a 2.74 mm thickness. The Krugerrand has an actual weight of 1.0909 troy ounces and is struck in 91.67% pure (22 karat) gold. To make the coin resistant to wear and scratches, 8.33% of the coin's weight is copper. This alloy has long been used for English Gold Sovereigns, which gives the Krugerrand a more orange appearance than the silver-alloyed gold coins. After allowing for the copper content, the Krugerrand contains one ounce of pure gold. Click the product image or links below to view the first gold bullion coins. 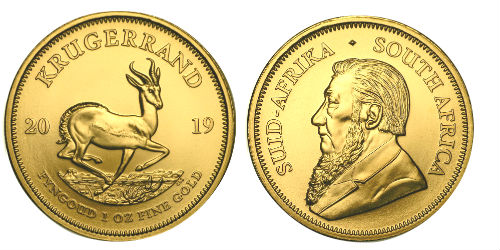 MEXICAN GOLD PESOS: Produced at the Mexican Mint, Gold Pesos range in denomination from 2 Pesos to 50 Pesos. Since the mid 20th century, these great little coins have been one of the most traded legal tender gold coins in the world. Each features the Mexican symbol of democracy, the eagle. These Gold Pesos from Mexico were considered the most pure gold bullion coins until the release of the 1967 South African Gold Krugerrand. The popularity of these Mexican Mint releases has only increased over the last couple decades and there is no indication of slowing down. Click the product image or product links below to make a purchase, or to learn more. 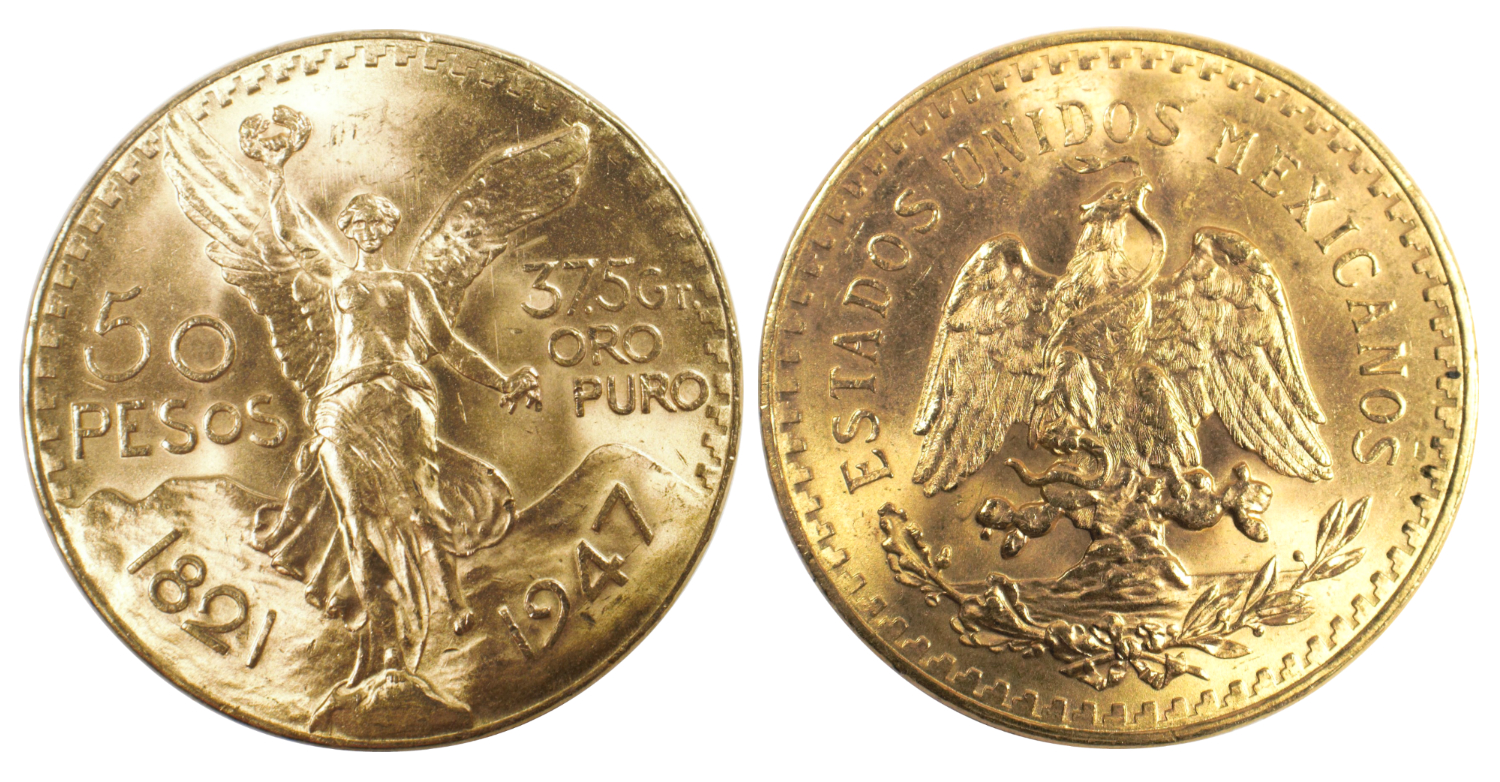 AUSTRALIAN GOLD COINS: The Perth Mint releases a variety of gold coins each year and is immensely popular among both investors and collectors for their interesting designs and impressive quality. The staple has been the Australian Gold Kangaroo, along with the popular Lunar Series fractional gold and the Swan issues of coins. They intrigued precious metal enthusiasts by releasing the first ever Australian rectangular bullion coin in 2018, the Australian Dragon. Click the product image or product links below to make a purchase, or to learn more. 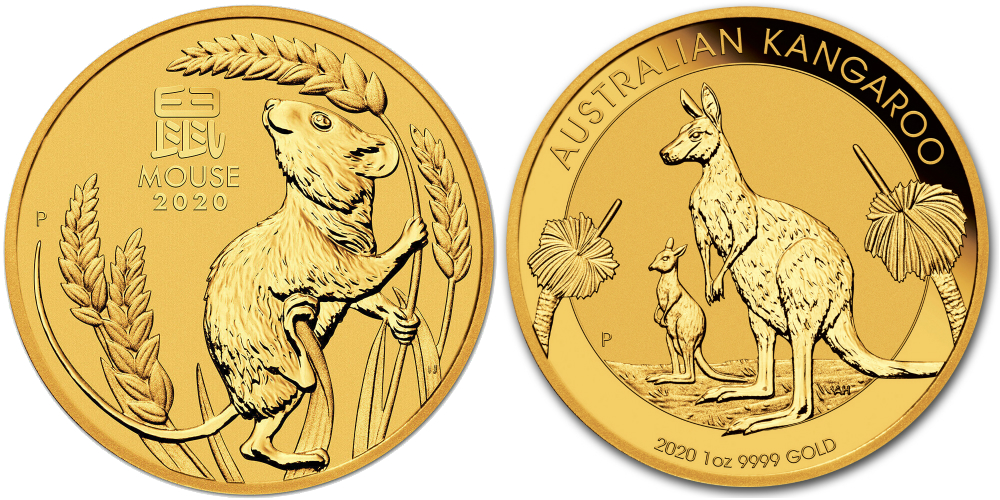 CHINESE GOLD PANDAS: Low mintages and annually changing designs featuring the iconic Giant Panda, have made these gold coins one of the most highly sought after world bullion issues ever. In 2016, the series was switched over to the metric system. We currently offer 2019 Gold Pandas in 3, 8, 15, and 30 gram sizes. All of these truly beautiful coins are in Gem BU condition and come sealed just as they left the People's Bank of China. Click the product image or product links below to make a purchase, or to learn more. 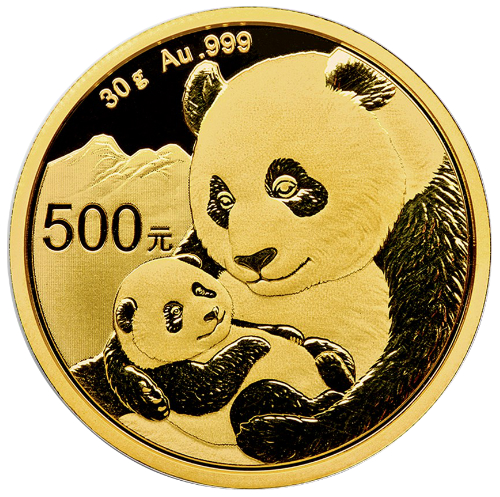 BRITISH GOLD BRITANNIAS: The first Gold Britannia was created and issued in 1987, and the classic design is still being used today, although The Royal Mint continues to add the latest in security features to their products. Sculpted by Philip Nathan, this coin is produced by The Royal Mint of Great Britain. These beautiful 24 karat 1 ounce gold coins are an impressive addition to any precious metal portfolio or collection. Click the product image or product links below to make a purchase, or to learn more. 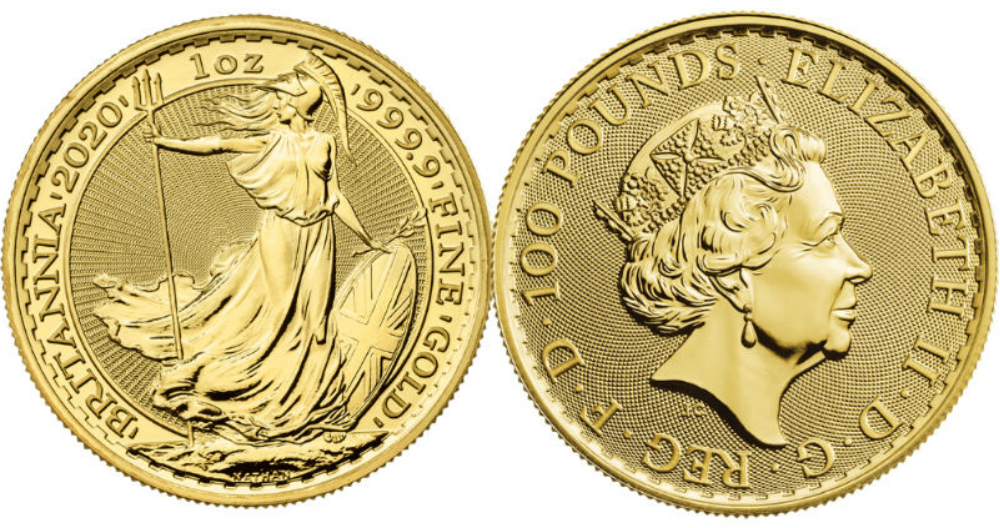 Gold bars are a popular alternative to U.S and World gold coins. Private refineries, or sovereign mints such as the Perth Mint, and the Royal Canadian Mint offer gold bars in many different sizes. This enables investors with any budget to invest in gold from the most reputable sources. Another reason gold bars are so popular among investors is that they typically carry a lower premium over the gold spot price, allowing you to get more gold for your buck! Below are some of our best gold bar sellers.

SUNSHINE MINTING GOLD BARS: Made in America, Sunshine Minting is one of the largest, most popular and well known, private, gold and silver refineries. They offer their bars within an assay card and are sealed in Tamper-Evident Proof packaging measuring in at 2 1/2" x 3 3/4". The obverse of each bar shows the Sunshine Minting logo; an eagle with the sun and its rays in the background. The weight and purity of the bar can also be found stamped on the front, along with a unique serial number for every bar. The reverse of each bar is stamped with a repeating rising sun design, and their newest bars feature Sunshine Mint's Mint Mark SI™ micro engraving anti-counterfeiting security feature.

Sunshine Minting Inc., also referred to as the Sunshine Mint or SMI, has been producing some of the highest quality precious metals since 1979. Based in Coeur d’Alene, Idaho, they are one of the leaders in privately minted bullion and they fully guarantee each one of their products.